Wednesday on my visit to Side I had not one but two novel experiences. The first was a visit to the Manavgat waterfalls, which both of my guide books praise highly as an idylic retreat, the other were two screwing tortoises and later two others. Apparently it’s that time of year, at least if you’re a tortoise.
Watching tortoises during copulating is a view at once endearing and ridiculous, which – if you think about it – is probably also the way human intercourse would look from a tortoise’s perspective. The way it works as far as I could tell is that the male bonks the female’s shield repeatedly (a sound that is quite distinctive and led to my discovery of the second pair) to get her all fired up between periods of mounting for which he makes the most bizarre noises + cum face. All in all quite a sight to behold.

The other major revelation was the “waterfall.” It’s more of a rapid really and part of an ensemble made to resemble … whatever … something, the sunken city of some place or other, probably. They built terraces all around the “waterfall” and then flooded them over. Now they charge admission and there are “professional photographers” all over the place who take your picture with your loved one and sell it to you, I bet they make a decent living since there are tons of young courting Turks. Naturally their pictures are underwhelming. Add half a dozen or so gift shops with pirated sweaters, shoes and other trash and you have a fairly good idea. The whole setup was so incredibly bizarre, and reminded me so much of a DeLillo novel, I gladly paid the 3,50 lira. The fact that I was pretty much the only non-native was a nice change.

The sunken city (?) at the Manavgat "waterfalls"

Lastly I couldn’t let you go without at least a half way decent image. This one was taken last night above the Dimcay dam, on the way to Gemüseauflauf [vegetable casserole], as a fellow touristess called it. 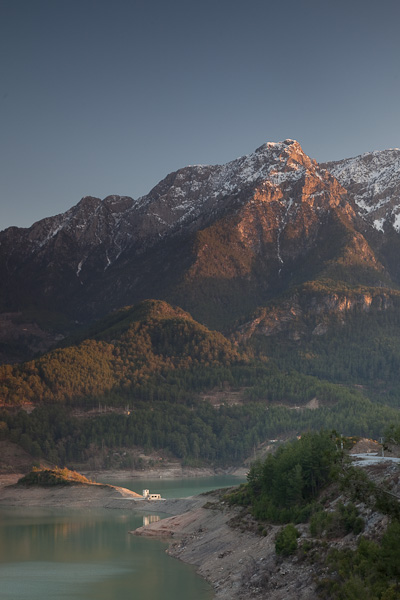 Scene above the Dimcay dam.

Thank the Almighty for Rental Cars

it took me only about an hour in Antalya to realize that He must have had travelers such as myself in mind when in His infinite wisdom He invented rental cars. I received a first strong pointer when I was trying to find dinner. Hardly anybody here seems to have a clue of what “vegetarian” means; naturally, trying to explain what a vegan is seems even more hopeless – which speaks for the kind of people who usually stay in Antalya.*

Even more bizarre about this section of Turkey is that fact that everybody speaks German, or some version thereof, and everyone immediately addresses you in German, tourists as well as Turks (this is only true of the town, not the country, noone speaks anything but Turkish as soon as you leave the tourist ghettos, which does not mean you won’t get invited for çay and smile at each over the Babylonian language barrier). I don’t think I have ever been so fully embedded in Ruhrpott culture as these last two days. My neighbor has brought a gigantic Schalke flag which covers his entire balcony. He also has a Schalke towel, and I think I saw him wear Schalke shorts the first day. He refers to Bild as “the newspaper,” in exactly the tone of that snooty TV ad for the Taz, which some of my German readers may recall. Right now he is in great dismay because the internet has not been working all day (“Dat geht mir auf den SACK, ey”).

Antalya itself lies in a pretty enough spot: the Mediterranean on one side, the mountains on the other and it has a castle overlooking the water. The city has exhausted its potential, photographic as well as otherwise, in a not too busy day, however – unless your idea of having a good time is getting sunburnt, and enjoying the all-inclusive buffet and free drinks at the hotel – which for a lot of people seems to be the case. I, on the other hand, have decided it’s serious rental car time, for although I enjoy a day at the beach or pool, I would feel too much like wasting my time if I ignored the surrounding area.

Yesterday [Monday] I went to the East as far as Anamur and quite enjoyed the coastline. I also added another member to my growing family, for I found another long lost brother – or rather he found me. This new addition to my family, Hayati, as opposed to my previous two Jordanian brothers, who were hospitable to the point of embarrassment, was obviously more interested in hustling me for money, which over an extended trip from his village to Anamur and back he half-craftily did. All the while he was addressing me as Thomas, which, curiously, happens to be the name of my cousin from the estranged side of my family. While I did not buy any rugs or knickknacks (nor did he try to sell any), my new-found brother (“Meine Mama ist Deine Mama”) got more and more drunk with the money he “borrowed” from me, while insisting that I should let him drive, for he still could, and that I should drink a second beer and some of his vodka for the police wouldn’t care anyhow – which may or may not be true. In the end he entertained / embarrassed / harassed / amused me for most of an afternoon and into the pitch black night at which point he was so shitfaced his excuses for not giving me back my money got more and more flimsy and he starting praising scenery which, for lack of light, no one could have seen. His company was charming / obnoxious / hilarious and culturally enlightening enough to have been worth the price of the vodka he drank “on the house” – although he of course promised to give me the money back when he’s in town on Thursday. I’m of half a mind to test his honesty. In large part because he claims to work for an outfitter who takes people waterskiing and I wouln’t mind trying waterskiing. Although I do not expect to ever see him again, maybe this will be one of the rare occasions in which mankind positively surprises me. I will also have to ask my parents what else they have kept hidden from me; I am sure there are some more skeletons in the closet considering how many brothers I have all over the world I have never heard of.

I think I will head back East tomorrow morning, when the imam faithfully reminds me (around 4:30 a.m.) that it is my heavenly duty to use the best light for my photography. Although I would personally set him half an hour later, his praise of Allah is a good incentive to get out of bed, for the very thought of sleep is laughable for at least ten minutes while he’s at it, and afterwards you are so awake you might as well get out of bed. Also on the list of places to go in the next few days are Antalya, Side and Dimçayi. I might also try my luck at just driving into the mountains to see what they have to offer. And I still have the lecture to write I have to hold two days after getting back. It’s on the topic of postmodernism and Antalya seems to be about as appropriate a place to write it as I can think of, the only place more appropriate I can think of would be Las Vegas [edit: I found an even better place, Manavgat-Selalesi, the dream escape of Turkish families and postmodern kitsch beyond belief].

PS (Wednesday morning): He also has a Schalke bathing suit. While he seems nice enough when you talk to him, I am beginning to really worry. In other news: there’s still no internet: “maybe tonight.” Whatever, I’m off to the West for the rest of the day. I hope I will be able to post this tonight.

* After a while I found that at least some restaurants have a vegetarian selection, with always the same three items on the menu, the difference between which – if there is any – is so slight it frankly escapes me.

For those who have read (or skipped) this far, here are some images:

please excuse the long silence. My life has recently been full of work and taken a few unexpected turns, which have kept my priorities focused on other things than updating my blog. Among other developments I now once again live in my native town of Freiburg, Germany, something I would not have considered possible as recently as three months ago. The city and its inhabitants have treated me very nicely so far, however, so I expect to stick around for a while and explore Europe some more. There are also a few things worth mentioning regarding my photography:

To begin with there are some excellent news: I was contacted by the German-American center in Stuttgart last week. They want to exhibit my Alaska images. The exhibit will open June 14 2012 and I will give a talk on my travels through Alaska on opening night, and show some slides. I also plan to switch a few of the images exhibitied three years ago in Freiburg, take out one or two I don’t like anymore and add one or two new ones from a short trip through Alaska’s panhandle last year and possibly include a few from my 2008 trip I overlooked last time.

In other news: I booked a last minute (!) trip to Turkey, something I have never done before (but figured I should do once in my life as a self experiment), and will fly there tomorrow morning. I expect German tourists and sociological oddities. Fortunately I also booked a car, so I can escape from the holiday ghetto I am spending my nights in. I will post images if I get anything worth sharing with the world. I am excited since I have never been to Turkey before, but a bit worried about my vegan food options.