The Most Photographed Barn in America

I recently reread a part of Don DeDillo’s novel White Noise quoted in David Foster Wallace’s article on Television and US fiction “E Unibus Pluram.” It is a section in which the narrator Jack Gladney, professor of Hitler studies, takes a colleague, a buffoonish popular culture critic, to see a local attraction, known as the most photographed barn of America. It is such a great piece of writing that it deserves to be quoted at some length:

Several days later Murray asked me about a tourist attraction known as the most photographed barn in America. We drove 22 miles into the country around Farmington. There were meadows and apple orchards. White fences trailed through the rolling fields. Soon the signs started appearing. THE MOST PHOTOGRAPHED BARN IN AMERICA. We counted five signs before we reached the site. There were 40 cars and a tour bus in the makeshift lot. We walked along a cowpath to the slightly elevated spot set aside for viewing and photographing. All the people had cameras; some had tripods, telephoto lenses, filter kits. A man in a booth sold postcards and slides – pictures of the barn taken from the elevated spot. We stood near a grove of trees and watched the photographers. Murray maintained a prolonged silence, occasionally scrawling some notes in a little book.
“No one sees the barn,” he said finally.
A long silence followed.
“Once you’ve seen the signs about the barn, it becomes impossible to see the barn.”
He fell silent once more. People with cameras left the elevated site, replaced by others.
“We’re not here to capture an image, we’re here to maintain one. Every photograph reinforces the aura. Can you feel it, Jack? An accumulation of nameless energies.”
There was an extended silence. The man in the booth sold postcards and slides.
“Being here is a kind of spiritual surrender. We see only what the others see. The thousands who were here in the past, those who will come in the future. We’ve agreed to be part of a collective perception. This literally colors our vision. A religious experience in a way, like all tourism.”
Another silence ensued.
“They are taking pictures of taking pictures,” he said.
He did not speak for a while. We listened to the incessant clicking of shutter release buttons, the rustling crank of levers that advanced the film.
“What was the barn like before it was photographed?” he said. “What did it look like, how was it different from the other barns, how was it similar to other barns? We can’t answer these questions because we’ve read the signs, seen the people snapping the pictures. We can’t get outside the aura. We’re part of the aura. We’re here, we’re now”
He seemed immensely pleased by this.

This piece is a gem of absurdity, not only because of the barn, but also because of the ironic fun it pokes at cultural critics (i.e. people like me in my other life) through the figure of Murray and his illusion of being critically distanced through his analysis of the whole scene.
The main reason I am posting this, however, is because it also immediately reminded me of my last trip to Grand Teton and the predicament of the tourist photographer, since Grand Teton is without a doubt the location of the actual most photographed barn in America, T. A. Moulton Ranch on Mormon Row Road. 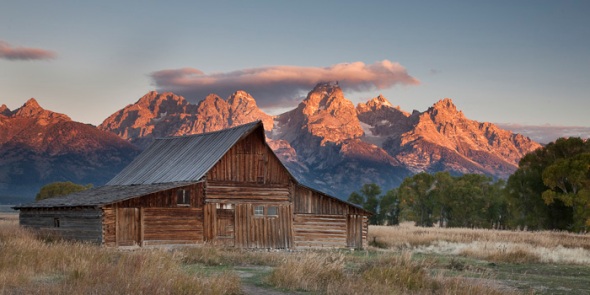 As opposed to DeLillo’s barn it is at least pretty and not just “aura.” Nevertheless, it is certainly one of the most over-photographed places I have ever been. The challenge here is not to frame a good picture (you almost cannot miss), but to exclude the other photographer’s cameras, tripods or shadows (the sun rises behind your back), as seen for instance in this “behind the scenes” shot.
In a way the barn is very emblematic of Grand Teton as a whole, which is also the location of the second most photographed barn in America (taken later the same day): 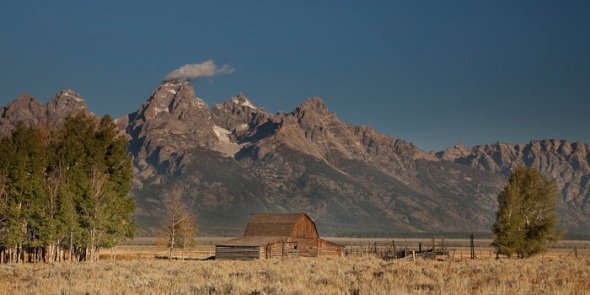 … and the most photographed pond in America: 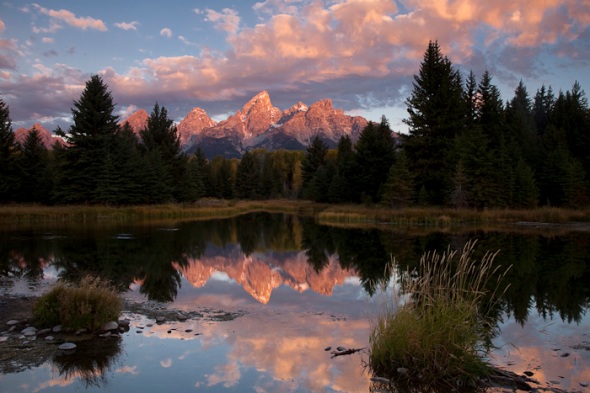 … where the situation is very similar: before sunrise a dozen photographers (yours truly, I am afraid, being one of them) tripod-wrestle to get into position, freezing their hands off to take slight variations of essentially the exact same picture which literally thousands have taken before them, all the while halfheartedly joking about “probably not selling too many of these shots.” Despite the scenery and the display of joviality, I cannot help but feeling like a moron when being part of the crowd, particularly because, as DeLillo reminds me, knowing of the absurdity of the situation does not remove me from it, reflection or cynicism do not necessarily mean one is less of a buffoon.

This entry was posted on January 12, 2011 by Johannes Fehrle. It was filed under Uncategorized .